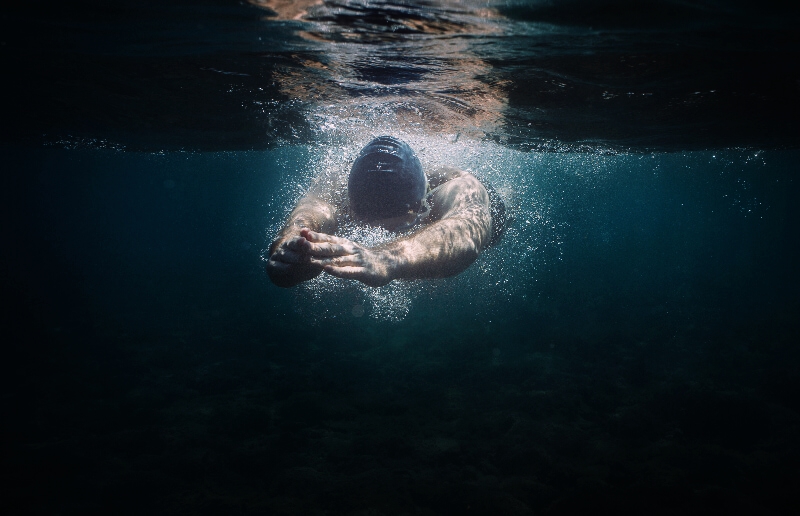 Mateo is one of those guys whose endeavour knows no limits. Since he was a boy he has lived his dreams through perseverance and determination. Today, he’s a living history of swimming in Spain. He has met many challenges and faced them with an unbreakable morale, but one stands out – when he decided to swim for more than eight hours, without a suit, in the spooky waters of Loch Ness – a first for a Spanish swimmer.

What were you thinking when you decided to challenge Loch Ness without a wetsuit?

Once you are in the water, although you know you are in Loch Ness, you tend to not think too much about the location, you are so cold that you try to give 100%, you concentrate on your technique and on pushing your limits. It is true that this location is unique, thanks to the yellowish water on the surface which darkens towards the depths, and the large amount of slate that makes up the lakebed, darkening the water even more. It makes you wonder why you decided to come!

You entered the lake at six in the morning. What was the hardest part of that day?

When you have been swimming for three quarters of an hour, you start to shiver, but you feel better as you warm up. When you get on the boat though, it’s very hard, you have cramps in your abdomen and you are in pain. You’re totally frozen and don’t know what to do to warm up … it’s horrible. It’s a largely mental game – the secret is to believe you can do it – even though it’s hard to know your limits at this point. There are swimmers that manage much more extreme conditions at the North Pole though, which makes you think you can always give more.

How do you manage to hydrate yourself in such adverse conditions?

Mainly with isotonic drinks. When the water is so cold, 11º, you don’t really lose too much liquid and don’t feel you need to drink as much, but proper hydration is important to maintain a good performance. If you lower your swimming rhythm this can induce hypothermia and cause you to fail. Have you faced many other challenges of this kind?

Yes, I have completed two round trips at the Strait of Gibraltar, breaking the previous record in both cases. I also beat David Meca’s record when I crossed between two of the Canary Islands (36km, from Tenerife to La Gomera) in 7h 35m.

Have you performed in open water in other countries?

I have crossed the English Channel twice, once by relays and the other individually. In both cases I was able to beat the previous records, one of them established in 1943. I have also swum in Norway and in the Acuatlon World Championships in England.

You are a three time Acuatlon World Champion holder, isn’t that right?

Yes, I started competing in Acuatlon in 2010, in Budapest, Hungary. There I won a gold medal in a discipline that includes a 5 km run plus 1 km of swimming in open waters. Two years later, in 2012, we traveled to Beijing, China where we won the title again. And finally in 2013 we achieved the last gold medal in the world championship held in London, UK. We completed the event in Hyde Park, on the same stage where the the Olympic Games contest was held. In addition, I also have also won a bronze medal in the discipline of Olympic Triathlon.

And you also hold a silver medal in the European Swimming Open Water Championship?

Yes, in 2009 in Cádiz. That was very special for me because it was my first international medal. A race of 3 kilometres that was very competitive, against athletes of the highest calibre. I was fighting for victory right until the end, especially with a Hungarian swimmer and another German who did not make things easy for me. Overall, what challenge has been the hardest in your career?

Without a doubt the crossing of the English Channel. Not only because of the temperature (15º), but because of the dirt that was in the water, a kind of brown color with a lot of pollution floating around. And especially because of the waves, which made me very dizzy. In addition, the currents in that area are very intense, forcing me to swim almost in the opposite direction to avoid them and following a complicated swimming path that was led by my support boat.

Are you familiar with low TDS water?

I pay a lot of attention to dissolved solids. We always look for high quality water at home, even for cooking. Either we use filtering faucets or bottled water with low mineralization that does not exceed 50mg of dry residue. Nordic Life has far lower TDS than others and I have to say that you notice the difference from the first sip. It’s pure water without a doubt.

How much water do you consume during your challenges?

It depends on the event, but when swimming in salt water, I can easily exceed two liters per hour. It is a lot of water!

Your training routine also includes middle distance races. How many trophies have you achieved as an athlete?

Every week I try to attend triathlons, duathlons or other races where I aim to win, or at least to be among the first three. In the last few competitions I was first twice, runner up and third in another two. Competing is the best way to train.

Would you like to join the Nordic Life Experience?

Yes! I find it fascinating since I drink a lot of water and try to take care of myself, especially before the important competitions. Nordic Water is so pure and it’s always positive to include something so healthy in your diet.